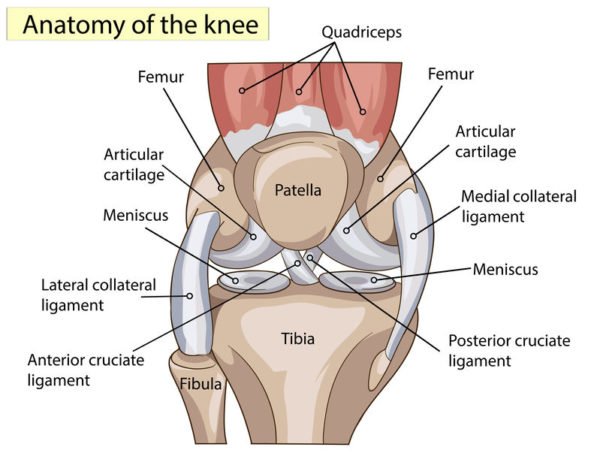 Your knee joint is made up of four bones, held together by several specialised structures that give protection and stability to your knee as you move.

The joint moves like a hinge between the femur (thigh bone) at the top and the tibia (shin bone) below. Thefibula sits beside the tibia. Thepatella (knee cap) rests at the front of the knee in a shallow groove called the trochlea. The patella slides in this groove as the knee bends and straightens with other structures providing support to keep the patella in place. Where each of the bones meets another bone, their surfaces are covered in protective articular cartilage to allow the knee to move without the bones rubbing.The bones are also cushioned bytworubbery shock-absorbers that sit in the middle of the knee joint, called the medial meniscus and lateral meniscus. 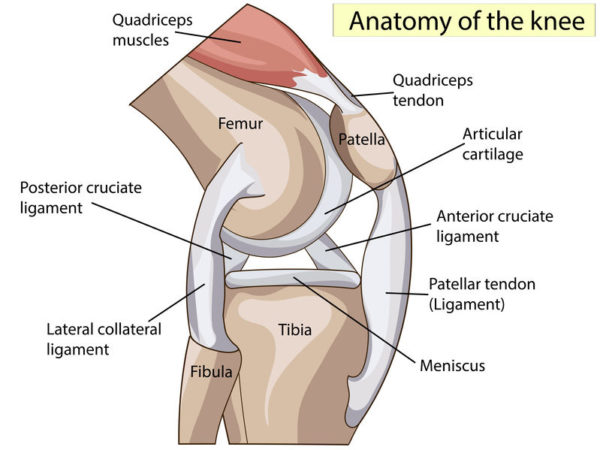 A strong sack called the joint capsule surrounds the bones and contains a small amount of fluid which helps the knee to glide smoothly and nourishes the structures of joint. On each side of the knee is a tough band that prevent side-to-side movement. These arethe medial collateral ligament (MCL) on the inside of the knee and the lateral collateral ligament (LCL)on the outside of the knee. Between the femur and tibia are two strong, rope-like structures which anchor the two bones together and prevent front-to-back movement of the joint. These are the anterior cruciate ligament (ACL) and the posterior cruciate ligament (PCL).

There are two main muscle groups that move the knee. The quadriceps are a group of four muscles that make up the front of the thigh. These muscles all blend together towards the knee and are attached to the bony patella via the quadriceps tendon. This tendon then continues from the patella, to the tibia as a tough band called the patella tendon. When the strong quadriceps muscles are activated, the force is transmitted through this chain of structures (known as the extensor mechanism) to straighten the knee. The second group of muscles is the hamstrings, the large group of muscles on the back of the thigh. These muscles attach to the tibia and fibula below the knee so that when they are activated, the knee bends.